The dark side of wind power

We can talk about numbers – more birds are killed by windows than anything else – so the number of birds killed by wind turbines is generally thought to be an acceptable amount of “collateral damage.” But what about seeing it as it happens? Is watching a majestic, soaring bird violently ripped from the air by the sweep of a wind turbine’s rotor blade enough to steer our national conversation on wind power toward greater attention in sustainability and the identification of absolute “no build” areas? See for yourself here. 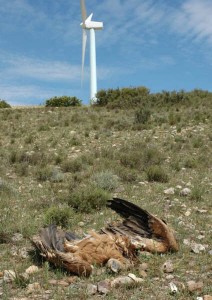 Much credit is due billionaire T. Boone Pickens for his effort to promote wind power as an alternative energy strategy, but the simple fact is that the most productive areas for development frequently overlap areas of great importance to native wildlife. Michael Fry‘s opinion piece in yesterday’s Los Angeles Times points out the problem well.

It’s time we started talking seriously about whether or not it truly is a good idea to erect and operate tens of thousands of new wind turbines. So far, media attention has focused on nothing other than wind’s “green” image, but that image is not quite so green when you look at it more closely.

7 Responses to The dark side of wind power