Against the backdrop of the seemingly endless flow of oil from the Gulf of Mexico, the IUCN has announced the likely extinction of the Alaotra Grebe, an endemic species from brackish lakes in Madagascar. Matt Walker’s BBC article implicates widespread use of gill nets in the lakes as a primary cause of death for these diving birds, as well as introductions of predatory, invasive fish that probably ate whatever young grebes they might have encountered. The Alaotra Grebe was last seen in 1985. 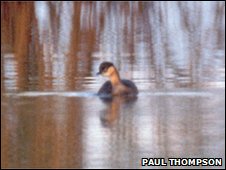 Paul Thompson's is the only known photograph of this species.