The brainchild of ornithologist Frank Chapman at the American Museum of Natural History in 1900, the National Audubon Society’s annual Christmas Bird Count was among the first true citizen science endeavors. Today, with more than a century of data under our collective belt, the CBC provides some of the best data on long-term population trends for wintering birds in the US and Canada. For species that breed well north of the reach of the Breeding Bird Survey, the CBC provides our only systematic sample of populations.

Our Stillwater CBC was founded in 1947 by husband-and-wife ornithologists Fred and Marguerite Baumgartner. Their efforts, combined with the dedicated leadership and service of all the members and friends of the Payne County Audubon Society, have helped build a remarkable database that tracks bird populations and, by extension, habitat changes in our region.

For just one example, check out this comparison of Loggerhead Shrike vs. Eurasian Collared Dove on our count over the last 30 years or so. (The abundance estimate on the vertical axis is birds/party-hour, which is a way to correct for the varying number of people participating year to year): 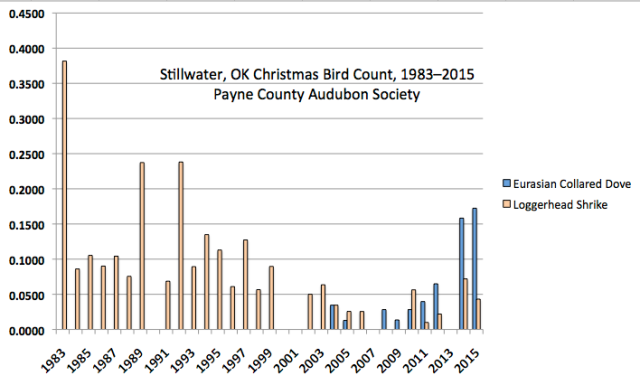 The grassland-dependent Loggerhead Shrike has declined dramatically, especially within the last 15 years. In contrast, the urban-adapted Eurasian Collared Dove has recently colonized Stillwater and is steadily increasing in abundance.

The 117th annual Audubon Christmas Bird Counts have been completed. The Sooner Lake CBC was conducted on Monday, Dec. 19 and the Stillwater CBC on Wednesday, Dec. 21. 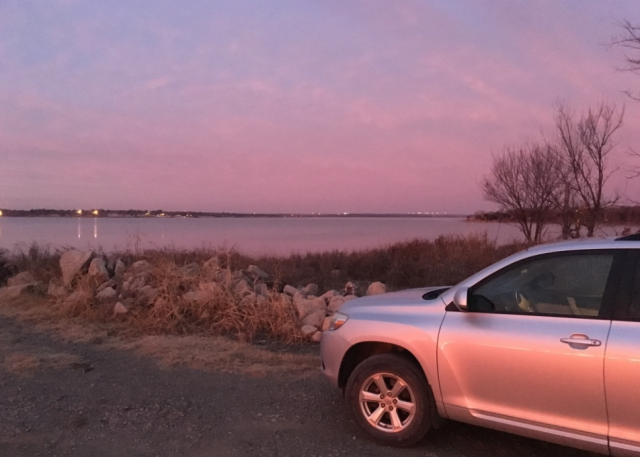 Twenty-six people donated their time and talents to the Stillwater CBC, and we are grateful to each of them. Together, these volunteers tallied 22,018 individuals of approximately 106 species. We set new high counts for at least 29 species:

The seven(!) Barrow’s Goldeneyes reported from Lake McMurtry win the rarity prize for this count, but without photos they’re likely to be omitted in the records review process. We also had some great “count week” birds (those observed within 3 days before or after the count, but not on the count day itself): Brown Pelican, Lesser Black-backed Gull, and Red-breasted Merganser (all from Boomer Lake).